A lot happened since my last blog entry, although only 3 days have passed. Time goes by so fast, but we live very intense here. The days are full of excitement, fun, work. I will write about yesterday in a separate entry – we had a wildlife day.

Wednesday morning started with the typical post-trip routine: clean the boat inside and outside. While I was taking a short break from my inside cleaning, standing on the stairs and looking over the cockpit to the shore I chatted with the guys who were done with the outside work. 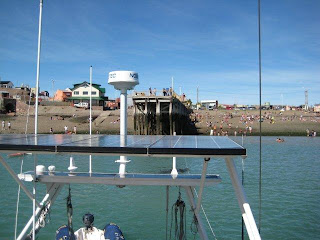 There I see a guy waving. We friendly waved back. Well, he kept on waving. Then I thought this must be the president of the Club Nautico who wants to talk to us. I told Marcus we should go to shore, but Marcus did not want to move anywhere. Hanno saw that they had a camera and a microfone. Then those guys came to the front of the pier yelling down to us that they are from local TV and would like to interview us. Well, what can I say? Since he does not speak Spanish Marcus sent me to talk to them. I took the Dinghi and first pulled myself along the rope that we had tied to the pier as security line. Arriving at the pier I saw them filming me doing that. Then they again told me they would like to interview. I asked why since there for sure are many sailboats but they said no, it’s rare. Anyways. I paddled to the shore (did not want to use the motor for the short distance) and met the guys there. Without any further comment but “thanks for coming ashore” the camera man positioned the interviewer and me where he wanted us to be and then they started the interview. So funny and surprising. They were quite happy I spoke Spanish. The interviewer started talking into the microphone while looking in to the camera: “We are in front of the Club Nautico here in Puerto Deseado where we see a visiting sailing yacht. We are now talking to them about their trip.” Then he asked me my name and asked me questions like “Where do you come from? Why do you speak Spanish? Why sailing in Argentina? We suppose the Atlantic crossing was very tough? Tell us something about your boat (length etc.). I suppose you also have a motor? What’s your final destination? How long will you stay in Puerto Deseado?” He was quite enlightened when I told them Atlantic crossing was ok and can be a bit tough when you hit a low pressure system, but it’s more likely you have no wind at all and it’s nothing against sailing in Argentina, especially Patagonia, which is one of the toughest sailing areas in the world. The interview took about 5 minutes, I enjoyed it. Too bad, we were not able to see it on TV.

Talking about TV. I went to the Prefectura to ask for permission to drive down the river here (Ría Deseado) further inland. The people at Prefectura here are extremely nice and helpful. They granted us the permission without problems. Being there in the office I noticed that they always have our boat on ¼ of their security screen, with which they oversee the most important parts of Puerto Deseado. So we could see Alita at anchor. Good to know that they have this security there. I was allowed to take a picture of this. Then he proudly showed us (Hanno was with me) how he can steer his camera and look way into the river, he showed us where we can safely navigate. He was able to zoom in and out and had fun doing so and showing us what they can see. That was very nice. 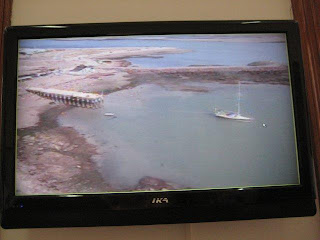 Talking about nice. Everybody here in Argentina is very nice and helpful. Prefectura; Nautic Clubs; the head of the “Fundacion de conocer a tu casa” here in Puerto Deseado, who told us all there is to see here, helped us with the boat, drove us to the supermarket, let one of the boys bring us to a guy sewing upholstery, lets us use the shower of his new home of the foundation etc.; people at visitor’s center (he knew about our sailing boat, had seen it, maybe on TV?); local people….and so on.

This brings me to the next great experience of the day. Just as we left Caleta Hornos our mainsail encountered a damage in the front part, so we needed it to be sewn. Before I try doing that with my LIDL-household sewing machine we wanted to see if we can find someone. All the tries to ask around the day before were in vain. Then finally the boy from the Club Nautico knew a guy who does upholstery (Sattler, “Tapicería”), a very nice chilenan guy who runs around topless, meaning not wearing a shirt (the second guy working there as well). He works in a little shed made out of corrugated metal (Wellblech), where I found historic professional Singer sewing machines (beautiful peaces) and a strong industry sewing machine. I told him exactly what to do, gave him the thread (Faden) and the repairing material. 2 hrs later we were able to pick up a restored sail for EUR50! That was great. On one part we wanted to have some additional stitching, so I did try my machine on the sail and it worked – even through 3 layers! This EUR 70 sewing machine has paid off many times in the meantime with all the stuff I made and repaired. Walking around town that same day we ran over the guy a couple of more times, walking and playing with his kids. Looked very nice with a shirt on ;-). If you ever strand here in Puerto Deseado with a broken sail, ask for the Tapicería close to the Club Nautico, they can help you! But be sure to bring the thread and repairing material as they will not have it. Here a picture of when we picked up the sail: 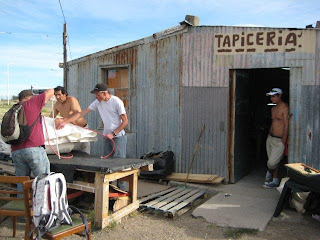 We finished the day with a not so good dinner at the Hotel, where we can use the internet and decided on the plan for the next day: our wildlife excursion. More about that in the next blog entry.

Here are some pictures of Puerto Deseado: 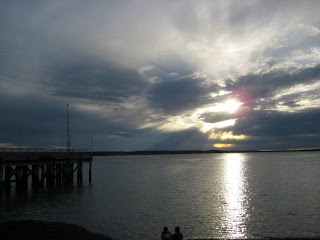 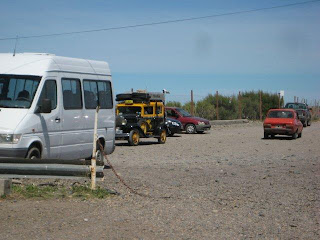 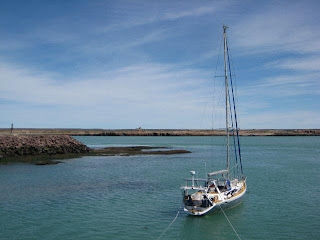 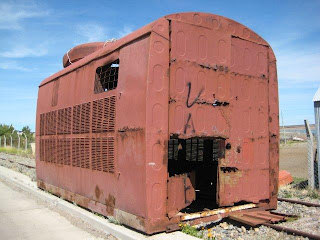 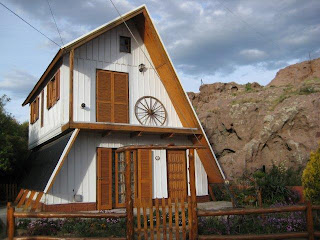 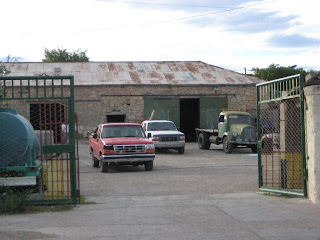 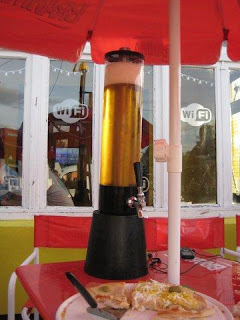 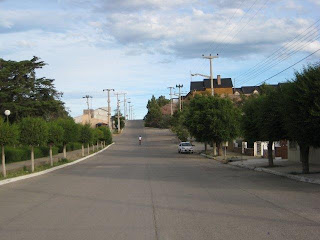 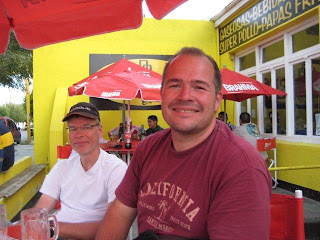 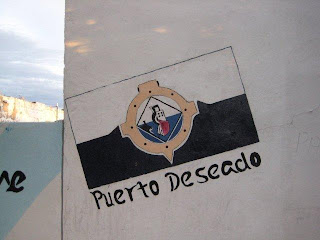 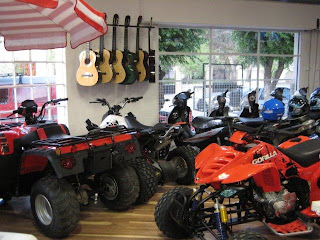 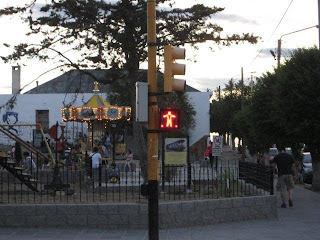