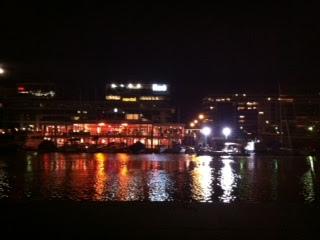 > View from Restaurant mile towards Yacht Club (lit up for wedding party). Alita is just at the left of this building. Beautiful view, but loud music from the parties...
>
Written by Micha um 19:15 Keine Kommentare: 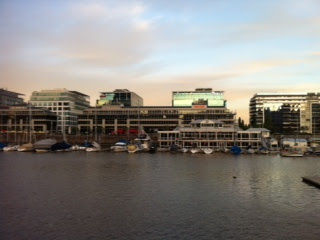 Tip: yellow parts of little Alita on the back of our Alita...Just left of the yacht club building in Puerto Madero
Written by Micha um 19:12 Keine Kommentare: 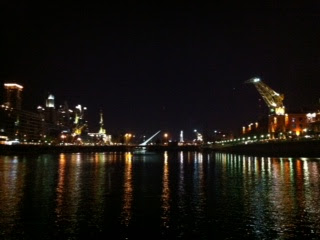 We are in Buenos Aires!! 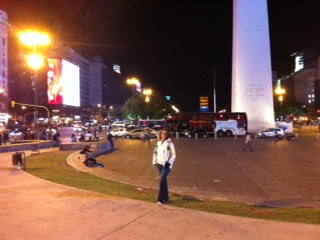 Three days have past since we left Rio Grande, two days since we left Brazil. I am thinking a lot about our wonderful time in Brazil, I will write a little story about it. I came to Brazil with no expectation and left with celebration. Celebtrating to have had the chance to see a very small part, about 2500nm along the caost) of this beautiful, green and colourful country. As if to say good-bye on the exit of the canal of Rio Grande Dolphins showed up. TO me they were Dolphins, only that the back fins were very tiny. Marcus sais it was a kind of a whale, but since whales belong to the group of Delphinae it makes no difference. They showed up around the boat and close to the and bank in the typical manner of swimming. BUT, that was not the last swimming animal we have seen in Brazil. Later in the afternoon, the sun was slowly moving down and I was on the back of the boat doing my sports (partly with the new stepper, which our new friend Bernhard has given me for my execrise) I heard a loud "pfff". Automatically the head turned in the direction and I was expecting a Dolphin and was ready to scream, but I could not see a fin. Instead I saw something about the size of a Dolphin, just a bit wider, the head brown and grey, the bodaý grey and the back fin more brownish swimming and turning. A sea lion lady had decided to be the one to say good bye on behalf of the fauna of Brazil. Oh she was so cute. She kept tossing and turning, like the Dolphin swimming on both sides, showing off what she can do. Mostly she was turning around her horizontal axle and then came up to breathe and show us her beautiful face. I was so excited that I kept watching her instead of running down and getting my camera. When finally I did of course she was gone.

The first sailing day was very calm, calm seas, very little wind, going very slow, an average of max. 3 knots. This sailing changed the following evening. Just before sunset we saw thunder and heard lightning in the distance, just over the land where Uruguay began. 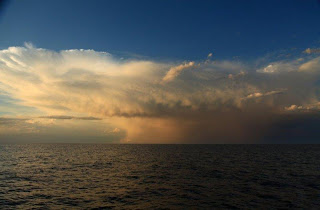 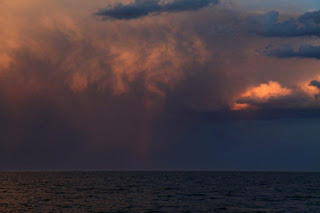 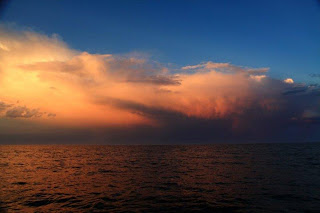 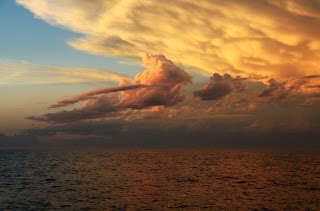 It became more forecful and came closer the darker it got. 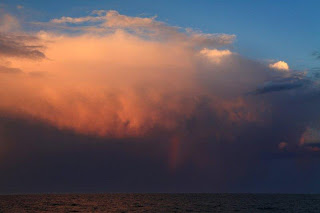 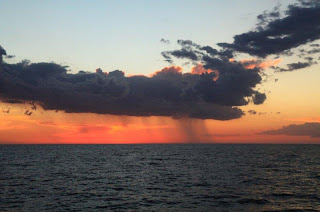 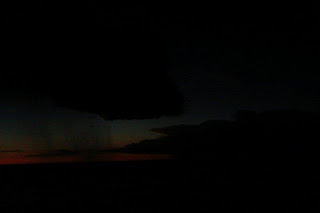 We mentally prepared for the worst. I was on the first night shift. Marcus went to bed and I took pictures of a beautiful but freightening sunset and even managed to get 2 pictures with lightning. 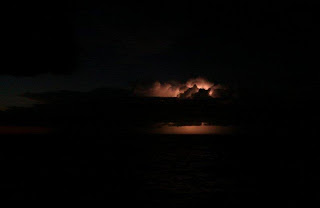 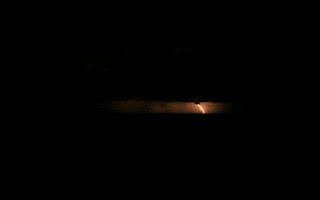 At the same time, the full moon was coming up, sunset on one side still lighting a cloud red and dark thzunderstorm on the other side. Very spooky, but so beautiful. Could not resist to take a picture: 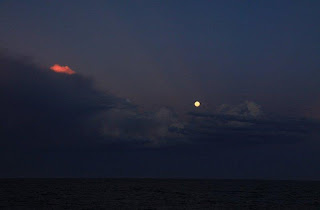 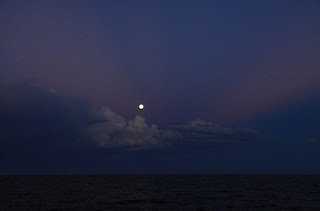 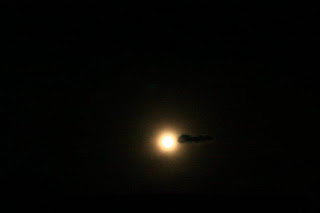 Then things got tougher. We had one night and day of constantly changing wind - in force (3-30 knots) and direction (almost all except NW). Let's put it this way: none of us got bored on his shift, but the other one in bed could mostly not sleep beacuse of the rolling of the boat and the noise accompanied with rolling sails in and out. Being tired was the result. Yesterday late afternoon the wind decided to become more constant from a SE - E direction slowly chaning more and more to north. Around 1000 UTC we sailed past Isla de Los Lobos and with it entered the Rio de la Plata, the river that flows between Uruguay and Argentina.

The distance to sail in Rio de La Plata from Los Lobos to Buenos Aires is over 130nm and full of marked ship ways for freighters. The problem is there are several marked ship streets with different entries and the ships come from all sides.

Sailing towards Buenos Aires you cannot avoid to come near and even cross those streets and thus huge ships. In my shift we sailed past two entries being close together, one leading to Montevideo en Uruguay and one to Buenos Aires. Plus there are anchorages so every direction you looked and sailed, there were huge ships, 2 driving by at a distance of 0,3nm (I already moved a bit out of the way, the distance was ok but still makes a bit nervous). 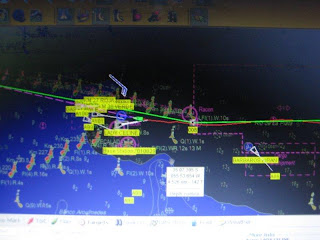 In this picture you see two ship channels and all the yellow marked ships at anchor. We are the little green ship driving through this. You can imagine I had to carefully look out and steer into this....

Not boring. But beautiful picture in the sunrise with huge freighter leaving his anchorage towards the rising sun... 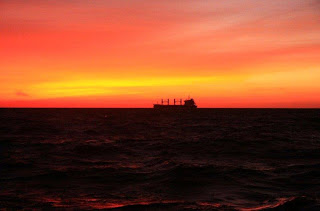 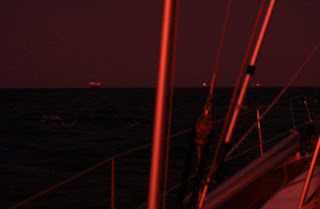 Now we're sailing along the river, in the middle between the two streets. Comparatively relaxed, with a nice wind from behind and small waves, we're going at 6 knots only with the Genua sail out. We're about 30nm away from the point close to the street leading to Buenos Aires, which is about 50nm away from Buenos Aires. It will be dawn til we get there and of course the more intersting part again is taking place at night. We expect to arrive at Buenos Aires around midnight local time. We will need to find a place to stand-by and wait til the morning, when the bridge opens so that we can enter into the Puerto Madero.

All pictures of the trip: http://sailing.smichah.de/#34.5

Update 30.11.2012: We stayed hove-to (beigedreht) for about one hour during dinner. Then we decided to move on without sails. We "sailed" thw whole night without sails up with inbetween 4 and 6 knots, just from the wind pressing on the boat (and little Alita in the back) and the waves pushing. When we had the tide going against us, we managed to slow down to 2,5 knots. As we did not know the opening times of the bridge to Puerto Madero we did not want to arrive in the middle of the night so we slowed down to arrive about 6 hours later than we could have. It was an interesting night. Slowly arriving at Buenos Aires, starting to see the city that we both like so much and where I have spent a long time working 9 years ago was so very exciting, it's hard to express the feelings. Although tis was a tough night with little sleep, we loved it. Just as we were close to entering the harbour of Buenos Aires (1,5nm away) another thunderstorm decided to give us a wet welcome to clean the boat and us from all we bring from Brazil. Well, we survived it, waiting an hour in the harbour for the bridge to open so that we could enter Puerto Madero and find our place in the Yacht Club, which is our home for the next week or two. Something cute? Entering the harbour in the rain a little bird came abord and heartly welcomed us with nice singing - I loved it although it irritated me a bit when I had to concentrate on steering while entering the pre-harbour....
Pictures of Puerto Madero follow tomorrw.
Written by Micha um 06:42 1 Kommentar:

On our way to Buenos Aires

Byebye Brazil and thanks for all the wonderful experiences we made here!
Written by Micha um 04:24 Keine Kommentare: