So this is our fourth night out, which means by noon tomorrow we're about half way there. While the wind is calm, mostly too calm to sail (we motored half the day yesterday) the waves are rocking and rolling from 3 directions and this throwing us around. Haha it's like a roller coaster without looping. We have up to 3m/9ft from north, the same from SE and a windwave from E. So sometimes that adds up and we have a nice "flight" over a wave and down its back. I wonder how I was able to cook two dishes today. After all it's a calm day and we're upright a lot and not beating against the wind but sailing downwind. The wind is not exactly behaving as predicted earlier. We were supposed to have it 50 deg apparent first today and then E again but it's been SSE all the time. And for sailing that it's mostly not strong enough. We might put up the Spinnaker sail (!) tomorrow, who would have thought.
We're both well up and get enough sleep. I am enjoying another starry night now. The day before yesterday I saw sooooo many falling stars it was amazing. None yesterday.

New crew on board

As I was just working on the sails I found a new crew member on deck. A sea bird has landed at one point on the port side of our cockpit. Poor thing is tired and exhausted and seems to have s problem with his feet as he can hardly move. Maybe broken wing as well? I tried to give him a piece of bread but he seems scared and moved a bit backwards. He is tucked in under the sheet (lines) of our foresail and the toe reling on the side. I wish I could help him. I don't think he will make it til Hawaii with us. Our last winged crew member died during the night. I pray for this guy and hope he is just taking a rest. Oh my heart is with him.
Written by Micha um 04:31 Keine Kommentare:

Every night is makes me so happy to see these millions of stars. This sky is just magic. On top of that I love the "stars" that we create in the water by mixing up the oxygen which in return lets the fluorescent algae glow. So pretty.
We are about 30% in to our trip to Hawaii, all good on board.

All good on board, we're having a (too) fast ride, not bouncy despite the up to 2,5m waves (7-8ft). Quite some water masses have washed over Alita and through the cockpit, but only little splash at the are where we sit and the little sitting upholstery is covered in waterproof upholstery.
I am so into the book I am reading that, while reading, I forget we're sailing out in the ocean. Too bad I will finish this 700 page book already in about an hour. But the next one is already prepared...
Our total travel time is estimated between 8 and 9 days. So we're already 17% there. Just got notice from our friends/ neighbours from Penrhyn that they passed Christmas Island 4am last night, so they are now 3/4 of a day behind us. They left Penrhyn 2 days after us. We have a date on Hawaii big Island. 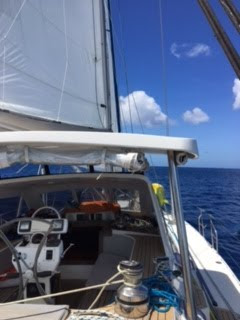 Hawaii here we come! We set sails and are under way. See you soon.
Written by Micha um 15:08 Keine Kommentare: 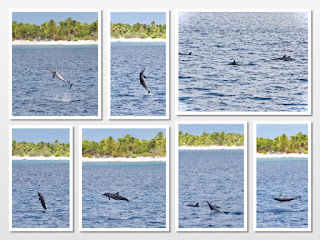 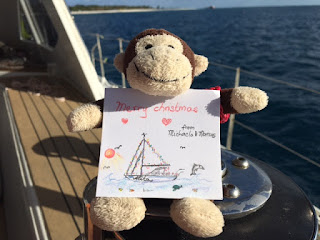 My best wishes for you, my blog readers, with the Christmas Island in the background. Just in case we don't make it to Internet-land until christmas.
Written by Micha um 23:29 Keine Kommentare: 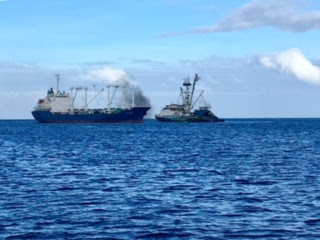 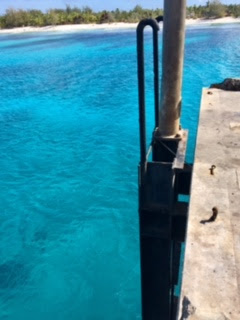 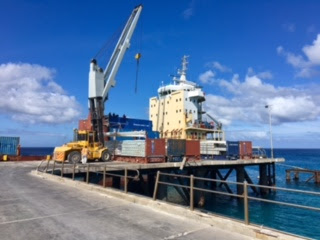 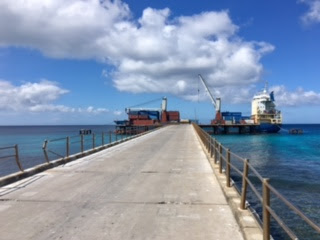 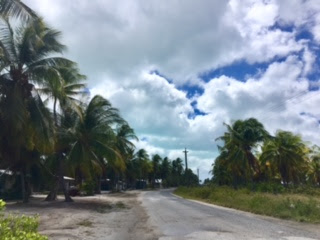 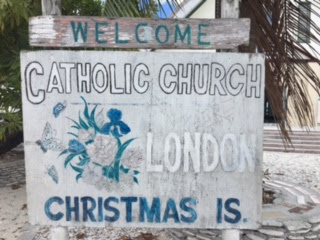 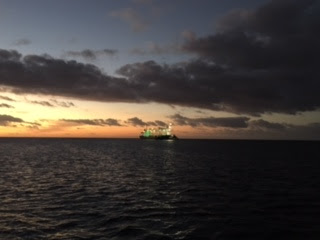 There is always something happening here. This morning a big fishing vessel arrived that produces mor smoke than a factory 100 years ago. It tied up to the freighter at anchor behind us. It looks like the fishing boat delivered a necessary, huge spare part to fix the freighter. Shortly after about 50men were brought out to those ships- we guess to help install whatever it was - and partly crew that was on land.
After breakfast Marcus drove me to the big ship dock so that I could get on land to check out. That was shortly after 9a.m. I returned at 3p.m.! It was a bit scary climbing up that rusted steel ladder - but better than the drive through breaking waves on saturday. I fixed a line to my backpack and took it up with me. Then Marcus fixed the garbage bag to it and I pulled it up. Would have been difficult to take it with me on the ladder. Especially since there were no steps the first 1,5m...
In the third picture you see the right side of the dock. At the very right end, behind those containers, is where I climbed up...

Walking to the town of London, where customs and immigration are located, I noticed that the clouds in the sky have then turquoise color of the lagoon water. So pretty.

Bureaucracy nearly killed me today. Customs needed copies of their clearance form - so I had to return 2hrs later. Of course, the new printer and copying machine in the back of the room is either not connected or already broken. But the guy would have shortened his lunch break to clear me out. Of course I said it does not matter, I come back even later. Boy, what a relief in his eyes. He was very nice though and honest.
The lady who runs immigration however tried to fool me and get money off me into her pocket. Customs warned me and in the end thank god the girl who checked me in did the check-out with the other girl in the office. And I did not have to pay. So for that it was good to come back later as well as the lady was gone. Why she did not clear me out earlier in the morning I have no clue. I guess the lady who would have transferred my money to her account was not there.

But while I killed time between my office adventures I met a really nice girl who runs 3 shops here. She is young, intelligent, a business women (studied economics and tourism in Hawaii) and a really good talk. So that was the upside and it shows me itMs possible. Even here. If you want to. And if you manage to study at a good university.

We are prepared for our trip to Hawaii starting tomorrow noon. We should be out there 7-9 days. We're aiming for Hawaii Big Island. So, one last look at the beautiful stars which won't be as visible in Hawaii because of too much light pollution - and at the boats at anchor that are lit up so bright that I get a christmassy feeling although it's just their regular lights.
Written by Micha um 23:27 Keine Kommentare:

So, the way the weather looks like right now we will be able to leave the day after tomorrow and are possibly even able to make it to the Big Island of Hawaii. That would be an awesome place for celebrating Christmas. So let's hope. It will have to be a fast, uncomfortable ride to be in Hawaii for sure before a northerly blow comes through.
Written by Micha um 15:28 Keine Kommentare: