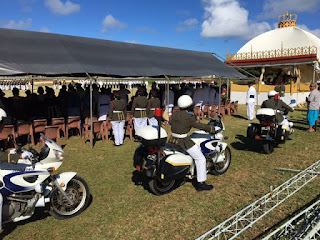 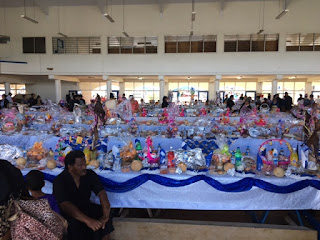 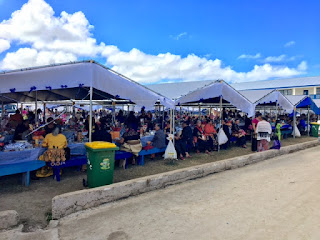 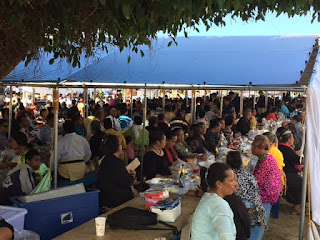 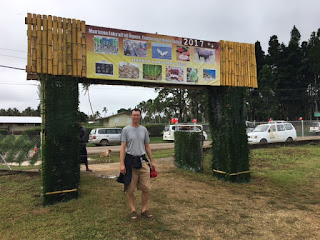 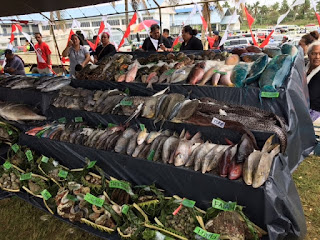 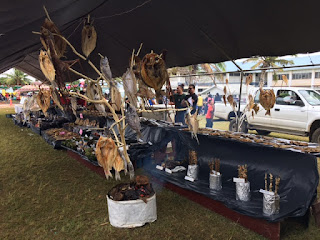 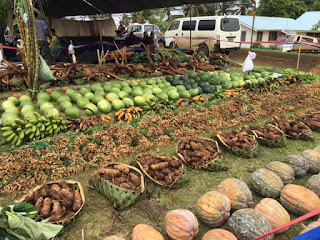 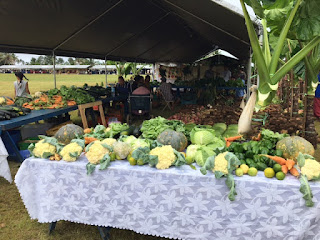 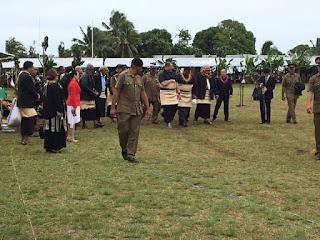 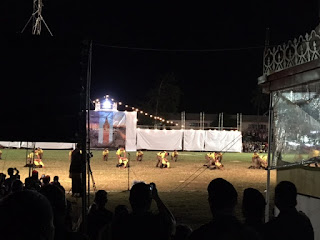 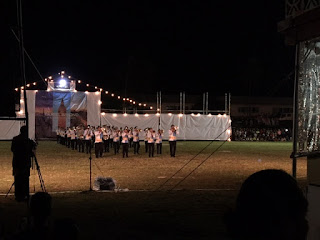 ... is indeed a big happening. They had parties going on for a week. In preparation for his birthday on the 4th of July and the lunch feast that day the people had already celebrated with a feast week. No wonder that not many locals showed up for the military birthday parade. The locals were al busy preparing the feast as we found out once we ran into the feast area. But back to the parade. They had all the navys walk to the beat of the navy brass band. It looked more like a stiff and strict dancing choreography. The king and his family appeared to their own gusto. But one has to understand. You can't really calculate the time you need to step out of the house, into the car and then drive onto the field which is just below the house, one minute drive away. It is quite a logistic to fit the cars and police motorcycles onto the street between house entrance and crown tent without jamming up.
The parade itself did not last long. After one song the king stepped into his open top military car with handles to hold onto and got driven around to "inspect" the troops. I don't know who was more excited- the grass that got rolled over or the people. Or maybe the guests of honour. There was the french navy ship that had come from New Caledonia, and then representatives from NZ, Aussieland, Vanuatu, Kiribas, German Ambassador and so on. And representatives of the villages from all the islands. They all left again after the lunch feast.
Before lunch there was a church service. Invited guests were able to be inside, the people could sit outside on chairs and listen via speekers. But most were still busy with preparing the feast.
I have never seen so much food being eaten in such a short time. So many pigs. Ok, you find pigs on every corner in Tonga so they won't really miss them but still. Hard to describe the scene.
What else was happening during that week?
A yacht regatta (our friends won the price for the best decorated boat and the last over the line), prize giving dinner, marching band evening with a marching band from all the schools for every year for the past I don't know how many years, the agricultural fair and last but not least the "Military tattoo". A big show with marching bands and demonstrations by the navy. Very cool. All of it. I could have touched the king a couple of times, got close ups with the big camera. All very traditional, lots of fun. At the agricultural fair the best of each brand were allowed to exhibit: best fisheries, best taro, best veggies etc. As soon as the king had walked by a stand everything they had on display was for sale. They sold the fish for $10/kg! We were very fortunate to have been there when all of that was going on. Certainly a fun experience!
Here are my phone- pix.
Written by Micha um 03:03 Keine Kommentare: