Last night at 9pm local time we set our anchor on the grounds off the beach of Vila the Maio on the Island of Maio. Beautiful here. The Travel Guide "Marco Polo" wrote that on this island everything is calm, beautiful and peaceful. SO TRUE. And SO CLEAN. Another pluspoint: it's not touristy here. Sad for the restaurants, but beautiful for the peace. Only individual tourism. Some posadas with a couple of rooms. Since the people don't live much on tourism, they don't beg you all the time. Only one guy today politely tried to offer us souvenirs.

Maio offers many beaches, many of them hard to ge there but the more beautiful. At the north there is a beach where the turtles lay their eggs in the summertime. There is a natural preserve here, salinas (Salt) and great swimming. But the sand is not as white as on Boavista and Sal. Considering the whole - island, town and beaches this comes to be my favcourite now, or at least same as Boavista. Boavista for the beautiful sand and the desert, Maio definitely for the living and restaurants.

Here in the bay we are 3 boats, only 2 are "vagabound" boats. One yellow 2-mast boat is here, which Marcus thought he knew as a boat from french people. It turned out to be the boat of the british owners of the beach bar, where the "whites" go. They had been sailing araound for 2.5 years when they got "stuck" here 18 months ago. They were unable to say "no" to the offer of aking over the beach bar. I talked to the owner, she had already wondered who would be in that boat which had all of a sudden been here in the bay this morning....

From Marco Polo I knew there is an italian restaurant where they serve good pizza. It's called "Tutti frutti". And I can tell you: the Pizza is great. The owner is an italian, married to a venezuelan lady. He built the house 9yrs ago and they opened the Restaurant. A grest restaurant and you can see cooking is his passion, but they struggle with the little tourism. She told us that the only way to get here is by a little plane from Praia. No Jetty coming here from BoaVista. She had been sailing the oceans for 17yrs, owning a boat and living from chartering - driving people around. She has crossed the Atalantic 8 times or so, now she is tired of living on a boat and is happy to be on land with her husband. Life in Maio. Like living on the countryside. Here are some pictures:

Overlooking the bay of Vila the Maio. The lonely boat is always Alita.

Again: Alita in the background over te fishing boats

More pictures on:
http://sailing.smichah.de/#11.0
or go to the link in the photogallery and then "Maio"
Written by Micha um 17:03 Keine Kommentare:

Unfortunately the E-Mail blog entry never reached the blog yesteday, so here it is. In the meantime we arrived safely at Maio, lying at anchor at the main city in the southwest. More tomorrow. 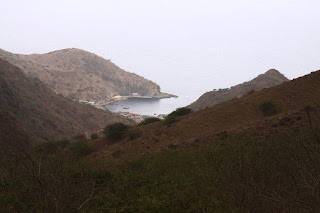 Just a quick note before I loose the internet: we safely arrived at Fogo, can't anchor here cuase of construction in the harbour, going on to the island of Brava.

Time went by fast. Today is our last day in Boa Vista. Actually we wanted to leave today but there is NO wind at all. So we will go ashore and fill up our fridge with fresh vegetables and fruits (so I can continue to work on Marcus' vitamin poisening ;-)) and leave tomorrow morning, heading for a Fogo with a stop over at a reef about 18nm from here, where Marcus can go diving and I can go snorkeling.
We had a great time here and met wonderful people. Our super, australian neighbours, Roger and Sasha had invited us for a marvelous dinner last night onto their boat Ednbal (THANK YOU GUYS!!!) and left early this morning heading for Sal. Such loveloy people. They have been on their boat for the last 6 years already and got lots of great stories, I put the link to their website into my linklist.
On saturday we had rented an "Aluguer" (car with driver) who drove us cross country through sand and over bad, stony "road" to the typical tourist sites, which are all beautiful: the beach at Costa boa esperanza, where you see the wreck of the ship "santa maria" on the beach (it has been ther for over 40 years), then to the Sahara-off spring desert "Desierto Viana" inbetween red volcano mountains and the famous bach "Santa Monica", which just has beautiful coloured ocean, gresat waves and about one million crabs on the beach. I really enjoy this island and could stay here and on the spots for a long time waiting for the right light to take pictures. Unfortunately we did not have that much time, since the driver was always waiting for us. Being the most easterly island Boavista is closest to the Sahara and thus can freely import fresh Sahara sand. It all comes from the east. They tried to build a wall on the east coast to prtect the town of Sal Rei but without succcess. The sand follows its own rules and wanders around the way it likes. But the basic material of the island is still volcano, which gives a beautiful mixture, the white really stands out against the red. Surprisingly as we drove around this desert island you see palm oasis. So there must be water sometimes. And the longer we travelled the more goats we found hanging out in the desert, some even walking through the sand (see in one of the pictures). Also we saw 3 cows and 3 donkeys, somewhere in the middle of nowhere.

To me this island is by nature very colourful. The changing coulours of the water in all dimensions of blue and turcoise, red - white - black sand, green trees and palm trees, black&white goats and cows, brown/black inhabitants and white tourists, colourful art....A peacful place I will not forget so fast.
Enjoy the last photo gallery from here. 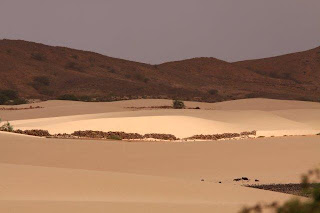 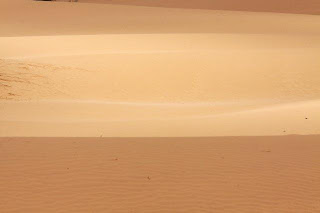 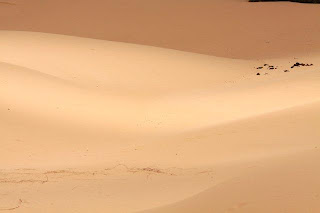 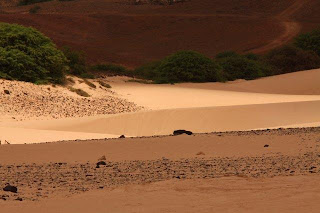 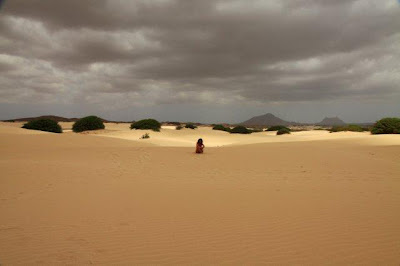 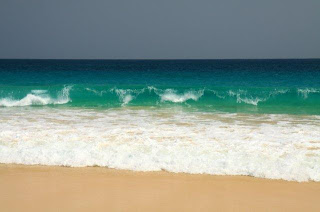 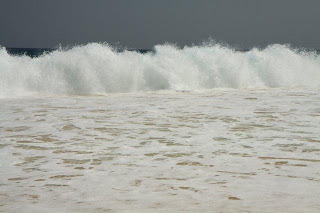 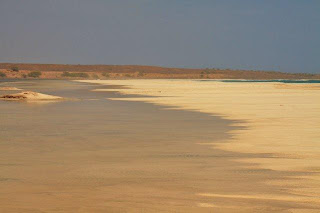 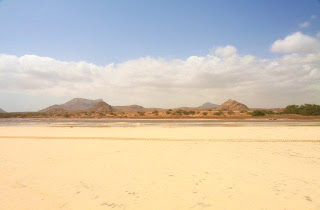 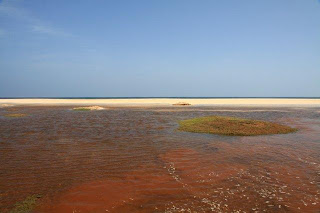 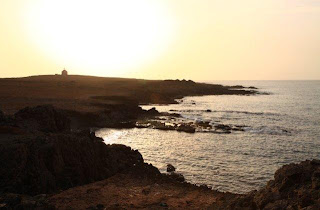 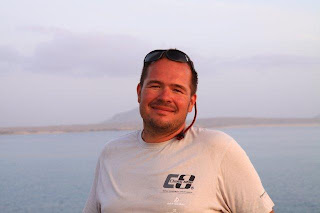 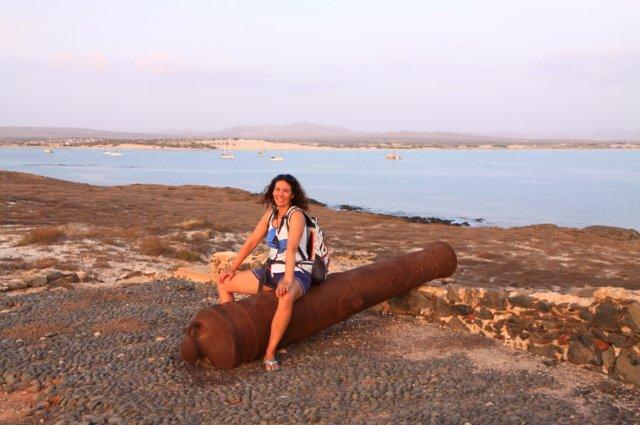 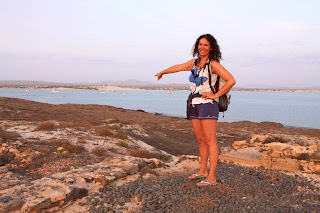 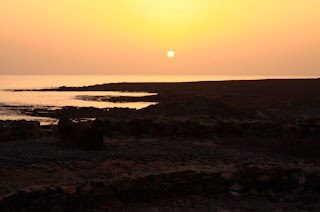 Alita in our first beautiful sunset 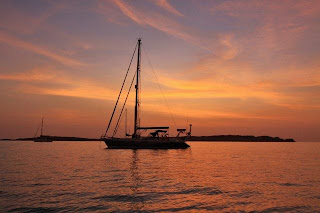 The two mast boat "Chaumane" in the sunset. I had already seen it in Las Palmas. 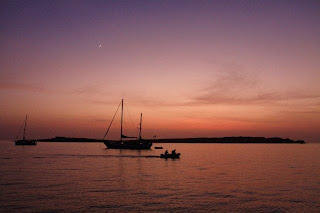 Have a wonderful week everyone.