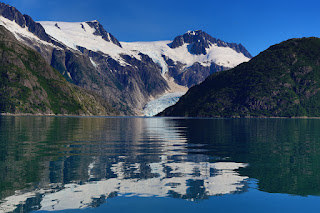 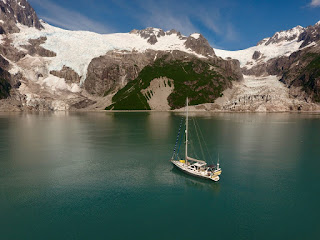 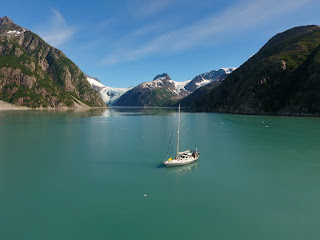 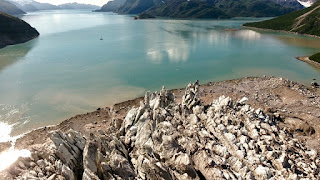 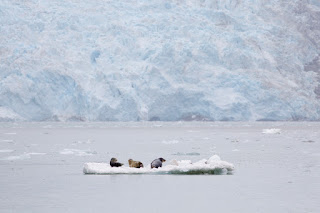 Two days ago, it was a day where the rain just kept pouring down, we peacefully remained at our anchorage. Late morning a waterplane came in, landed besides us and drove to the beach. You have to know we were in the middle of nowhere, in one of the Fjords, by far no town or no other person. We were wondering what they are doing, especially as the started drifting. When the drifted by Alita I sent Marcus to ask them iif they need help. So the men drove over bit the two young guys said they are ok, just waiting for better weather. That was an interesting response considering the weather report let us only hope for a very short period of no rain the next morning. But the boys could not wait. About 20min later they started the engine and flew away towards the mountains, but they did not make height. About 30min later I happened to look out of our window and I saw this plane driving by on the water really close. They circled us, trying to communicate because their radio on board
does not have the boating frequency. Marcus stepped out (still in pouring rain and no sight) and they asked us for fuel. Unfortunately we just had little Dinghy fuel, but that was better than nothing. Two young boys in their and 20s or early 30s had either not planned their trip right or any other problem. They had no money on them, no food, just a bit of water. We tied them to our Dinghy (as a fender inbetween) when Marcus gave them fuel and I offered them something to eat. First their eyes widened in hope of food but they responded they had not much money (15$ as it turned out. I went downstairs, grabbed a bag, put two apples, two bananas and a bag of chips in it. Oh they were so happy. We did not take money as they would need it if they ever made it to a town. They were going to fly along the coast over the water instead of the short way over the mountains. I hope it worked. We have their phone number and will call once we can- just to check how the story ended. These guy
s were soaking wet. I hope all went well. It was very funny to have a little airplane tied to Alita's stern..
Written by Micha um 11:26 Keine Kommentare:

So we made it to Kenai Peninsula two days ago late in the evening. We had a beautiful sail over from Afognak Island in good wind, blie skies and sunshine. Arriving at Kenai we entered thick fog, which in the meantime changed to rain and thick clouds. We're in this beautiful area full of glaciers coming down but we can't see them. We got a glimpse of "Split Glacier" yesterday as a very small part of yesterday's fog opened at the glacier for a while. But now the weather is really bad and as it looks now it will be for a couple of days and we don't expect to see anything even until we get to Seward to deliver our guests.
Written by Micha um 14:28 Keine Kommentare: